To listen to clips and find out more...

To order a copy of CD (CD ご注文方法） 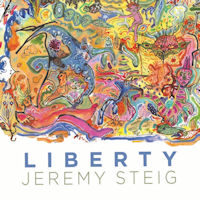 One afternoon in the autumn of 2020, Tetsuya Mashine, an arranger/bassist, handed me a big bunch of flowers as a tribute to my late husband at Jeremy’s studio in Yokohama. He seemed slightly apologetic for not having done that earlier. Tetsuya played with Jeremy and Vic Juris when they came to Japan in 2004. I remembered the dinner his wife made when Jeremy and I ate with his family. He said that both his sons, who had been in elementary school back then, had already come of age.

I wanted to treat him to some of the recordings Jeremy had left on his Mac, so I turned it on and pulled out a couple of Pro Tools files for Tetsuya to click on. However, as soon as he put his hand on the mouse, the screen turned dark, and the Mac never restarted. I wasn’t surprised at all because it was the Tower Jeremy had purchased in New York in 2005 and continued using almost every day till a month before his passing in Japan in 2016.

The next morning, Tetsuya phoned me and urged me to “do the right thing” with all the recordings on the hard disc, which meant listening to all the files, putting them in order, and releasing what needed to be released. He offered to work with me using his own computer and other necessary equipment because I would probably have to give up the old Tower.

Two months after Jeremy died, I had begun commuting to the studio to make a list of the recordings he had left. He used to record almost everything he played at home. On entering the studio, he would turn on his microphone and the Mac to record himself building flute ensembles as he went along. He played most of the tracks straight through, sometimes for more than an hour at a time with no interruption. He also recorded himself on the keyboard, singing comical lyrics he made up.

To be honest, I was at first tempted to abandon the effort. The sheer volume of the recordings alone was overwhelming, and for a while, I was afraid to fall asleep at night. Under normal circumstances, people take for granted that things will be better the next morning: the sky is blue after a stormy night. However, I was waking up every morning to the permanent loss of my husband and a body of his works that did not yield an inch, which felt to me, at that time, like a massive gravestone.

In the following two and a half years, however, I managed to listen to and list everything from the years 2012, 2015, and 2016. I also listened to some one hundred one-hour-long DAT files from the 1990s, transferred what was on several open reel tapes onto CDs, and scanned Jeremy’s written music and organized the pieces in folders.

What drove me had nothing to do with a widow’s sentimentality as you might expect. It was a sense of responsibility to examine the fruits of years of my husband’s commitment to music and the simple curiosity to experience what was there. It was fun to scribble my impressions as his improvisations and harmonies unfolded. I found myself inspired to hear more. Then in 2018, I shoved the resulting lists to the far end of a bookshelf. At that time, I didn’t know what else to do with them.

COVID-19 took away gigs from musicians all over the world, and Tetsuya was no exception. After finishing his daytime work, he would come to the studio, sit in front of the pair of Tannoy monitors, and listen to the new sounds of a skilled musician. I was happy that my lists helped a lot in selecting the pieces for this album.

One night, Tetsuya said, “Pity we’ve lost him.” We both had face masks on, so I couldn’t see it, but I thought he smiled, remembering Jeremy when he was still alive. In 2004, Tetsuya played in Jeremy’s quartet at a club in the West Village in preparation for the trio’s gigs in Japan. It is mystifying that he is now part of Jeremy’s final album. I’m grateful to him for having finished off the old Mac that day!

Five and a half years have passed since Jeremy died. Liberty closes my part of his legacy project.

Jeremy Steig was a wellspring of creativity, and he deeply cared about freedom in music.

My hat’s off to you, Jeremy.

Please send your name, shipping address and phone number to:
mail@jeremysteig.info
Payment can be made by Paypal or major credit card.
Limited 100 copies.